By lisamarchuk June 20, 2013 Uncategorized
No Comments 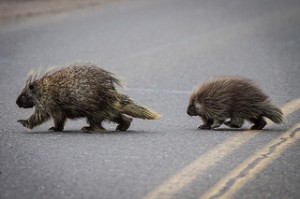 Erethizon dorsatum, better known as the porcupine, is well known and respected by outdoor enthusiast. Porcupines have an unmistakable appearance. Hunched shoulders give the impression of an arched back and the tail is thick and muscular. Sharp, tapered quills cover the body of the animal excluding the muzzle legs and abdomen. When undisturbed the quills are concealed by guard hairs. However, when threatened or alarmed, muscles function to erect the quills.

Found throughout the majority of Canada the porcupine prefers to live in treed areas where rock formations serve as den sites. They feed on the inner bark of trees as well as the leaves of select plants. Generally a quiet animal, the best indicators of their presence are cut twigs, missing bark on trees and noisy chewing sounds.

Porcupines are slow moving and shortsighted. This allows them to be easily approached by a nosey dog.  When threatened the porcupine first attempts to flee and seek shelter either under ground cover or up a tree, if this tactic fails the porcupine resorts to a more offensive defense. Turning away from the threat the animal erects its quills and lashes its tail at the encroaching threat. If a dog comes in contact with these quills they penetrate and become embedded within the skin and deeper layers. Backwards facing barbs ensure that the quills are held firmly in place. 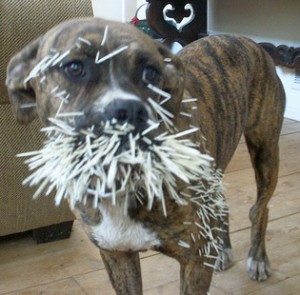 Treatment of a porcupine encounter requires the removal of the quills ideally as soon after the incident as possible. Porcupine quills cause immediate trauma to the structures they penetrate resulting in pain and inflammation. Since dogs approach porcupines face first, often with open mouths, the majority of quills are found on the head, neck and inside the mouth. The quills can migrate within the body over time if not removed. In the region of the head and neck this may affect the eyes and brain of the animal. Quills located further from the head can also pose a threat to thoracic and abdominal organs. It is therefore important to seek veterinary care to locate and remove quills.