Over the Counter Pain Medications

By lisamarchuk July 26, 2013 Uncategorized
No Comments 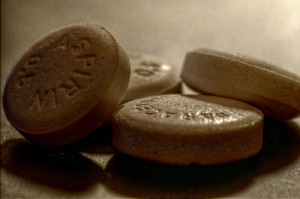 Over the counter pain medications (OTC), such as Motrin, Advil, Aspirin or Tylenol, are familiar products found in most Canadian homes. People are comfortable following the instructions for these products relating to quantity, timing, and administration of the medication. Owners with a pet that is experiencing pain may be tempted to medicate the pet with one of these products. The following discussion explains the reasons to avoid OTC pain medications in pets and why you should consult with your veterinarian.

Non-steroidal anti-inflammatories (NSAIDs) are a class of drugs used to reduce fever & inflammation as well as provide pain relief. Some OTC medications included in this class are drugs containing ibuprofen and acetylsalicylic acid (ASA). Motrin and Advil contain ibuprofen and Aspirin contains ASA.

The primary mechanism of action of NSAIDs is through binding to and inhibiting a class of enzymes known as cyclooxygenases. These enzymes and their products are major players in the pathway of inflammation. Unfortunately, this mechanism also leads to the adverse effects of the drugs. Blood flow is decreased to the lining of the stomach and intestines as well as to the kidneys. This can result in ulceration of the stomach/intestine and damage to kidney tissue, which may contribute to kidney failure. It can also decrease the clotting ability of blood. A single ingestion of an NSAID can have severe effects including: vomiting, diarrhea, abdominal pain, anorexia, lethargy, muscular weakness, seizures, coma, and death. Toxicity is also often more severe and occurs at a lower dose in cats due to decreased amounts of liver enzymes required to metabolize the drug.

Veterinarians can prescribe NSAIDs that are more appropriate for treating pain in animals. They act more selectively on specific enzymes and reduce the risk of adverse effects. NSAIDs should be avoided in animals with compromised liver or kidney function, dehydrated animals, or animals with bleeding disorders or GI ulceration. Blood work prior to beginning a course of NSAIDs allows veterinarians to assess the suitability and safety of the drug for the animal.

Acetaminophen is the active compound found in Tylenol. It is largely regarded as a toxic substance in veterinary medicine and accidental administration constitutes an emergency. Once ingested by an animal the drug is absorbed and reaches the liver. In the liver it saturates the normal pathways of metabolism resulting in the production of a highly toxic compound. This compound primarily damages the liver and red blood cells. The damage to the red blood cells results in a decreased capacity to transport oxygen in the blood. Mucous membranes, such as the gums, will appear a muddy brown colour, the animal’s heart rate and respiration rate will increase, and the animal will exhibit signs of weakness and lethargy. Accompanying these signs there may also be vomiting, difficulty breathing, facial and paw swelling, and possibly death. The prognosis depends on the quantity ingested and length of time before treatment.

Call your veterinarian if you suspect your pet has ingested one of these drugs. It is important, if possible, to have the medication container on hand to provide accurate information. Depending on the quantity ingested and the signs the pet is exhibiting, clients are encouraged to bring the animal to a clinic for assessment, treatment, and monitoring, as necessary.