By lisamarchuk November 13, 2013 Uncategorized
No Comments 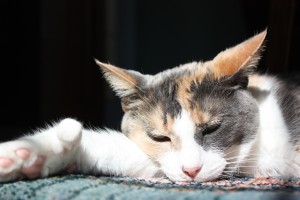 THIS IS AN EMERGENCY!!

Male cats are at risk for an especially life-threatening complication of this syndrome: the urinary blockage.

Mucus, crystals and even tiny bladder stones can clump together to form a plug in the narrow male cat urethra. The opening is so small that it does not take a lot to completely or even partially obstruct urine flow. Only a few drops of urine are produced or sometimes no urine at all is produced.

It is hard to tell when a cat is blocked as the inflammation, urgency, and non-productive straining also accompany cystitis whether or not there is a blockage. The easiest way to tell is by feeling in the belly for a distended bladder. It is often the size of a peach and if there is an obstruction the bladder will be about as hard and firm as a peach. (Normal bladders are usually soft like partly filled water balloons, and non-obstructed inflamed bladders are usually very small or empty). Still, while this size and texture difference is obvious to the veterinarian, most pet owners are not able to feel for the bladder correctly. If there is any question about whether a male cat is blocked, he should be taken to the vet for evaluation as soon as possible.

If the blockage persists 3 to 6 days, the toxin build up will result in death.

DO NOT PUT OFF HAVING THE CAT CHECKED!
Confirmation and Assessment

The veterinarian will feel the bladder in the abdomen and attempt to express urine. Sometimes gentle pressure will actually expel the obstruction but usually the cat will require more aggressive means of relief. The blocked cat will be assessed for dehydration and toxin build up. The urinary toxins that build up in obstructions commonly cause vomiting, nausea, and appetite loss. They can also cause life-threatening heart rhythm disturbances. Your cat is assessed for all these complications as they will need to be addressed.

A partial blockage can be just as serious as a complete blockage. Treatment is usually the same.

The single most important thing for the obstructed cat is to have the blockage removed. This is done by placing a urinary catheter through the urethral opening and either through the obstruction itself, or using pulses of flushing solution to move the plug back into the bladder where it can be dissolved. This procedure is often painful and sedation will most likely be needed. Some cats are unblocked with great difficulty only. Some cats cannot be unblocked and must have an emergency perineal urethrostomy to re-establish urine flow .

Fortunately, most cats are successfully unblocked. The urinary catheter is sewn in place and will stay in place for a couple of days. Often a urinary collection bag is attached to the catheter so that urine production can be measured. Sometimes, the bladder is filled with sterile fluid and flushed out to remove crystals, inflammatory debris, and blood.

When the blocked cat has filled his bladder to capacity, his kidneys stop making urine as there is nowhere for it to go. Once urine flow returns, the kidneys quickly begin to correct the metabolic disasters that have been taking place. Often an extremely sick blocked cat can be snatched literally from the jaws of death by having proper fluid support and by re-establishing urine production. It is amazing how efficient the working kidneys can be in restoring the body’s balance; still, it is important to realize that this is a serious condition and not every cat can be saved.

Occasionally a cat is brought in soon after blocking and achieves an excellent urinary stream immediately after unblocking. These cats may be able to proceed with treatment without having to spend a few days in the hospital or without having to have the catheter sewn into place. Most blocked cats do not fit into this category but is important to realize that some cats are able to avoid more aggressive treatment

What Happens during Hospitalization?

The kidneys do most of the work during the recovery phase. The cat must wear a type of collar that prevents biting at or removing the crucial urinary catheter. Urine production is monitored closely as after the obstruction is relieved often dramatic urine volumes are produced. (This is called post obstructive diuresis and if the cat is not drinking on his own, it is crucial that his fluid therapy matches the volumes produced as urine. If they do not, he will dehydrate.) Fluid therapy is given either intravenously or under the skin, depending on the degree of support needed by the cat. Medications are given to relieve pain and relax the irritate urethra.

After a couple of days of catheterization, the catheter is removed and the patient is observed for re-blockage. He will not be allowed to go home until his urine stream seems strong and relatively easy. Some cats will leak urine at this point as it is painful for them to engage in normal pushing; this is generally a temporary problem. Once he seems to be urinating reliably on his own, he will be released for home care.

What to Watch for at Home after Discharge from the Hospital

In an ideal world, owners can learn how to feel the abdomen for a firm obstructed bladder. This is hard to teach at discharge mostly because at this point, the cat is pretty sore. There will usually be medications and dietary recommendations to go home with the cat.

It is crucial to realize that the cat is at risk for re-blocking for a good week or two from the time of discharge.

This is because the irritation syndrome that led to blocking in the first place is still continuing and as long as the episode continues, blocking is a possibility.

At home, the same straining and possibly bloody urine will still be produced. It is important for the owner to be aware of urine volume being produced and of bladder size, if possible. Any loss of appetite or vomiting should be reported to the veterinarian at once. If there is any concern about reblocking, the veterinarian can determine fairly easily if the cat has re-blocked.

Most cats recover uneventfully and most do not need continuing medication after they have recovered. Some cats, especially if they have blocked before, will require on-going treatment. Once the cat is no longer obstructed, management is the same as for any other cat with feline idiopathic cystitis that is not obstructed.
Occasionally the bladder over-stretches while it is blocked and is permanently damaged. Such cats require medication to help them contract and empty their bladders normally. This is unusual but one should be aware of the possibility.