By lisamarchuk March 22, 2014 Uncategorized
No Comments

Microfilariae reside in the blood of most, but not all, infected canids.
Microfilariae (307-322 µm x 6.8-7.0 µm) are ingested by feeding female mosquitoes. After two molts (approximately 2 weeks), infective third-stage larvae (L3s) are present in mosquito mouth parts. Development may be slower at cooler temperatures and ceases at temperatures below 57°F. Development progresses in the mosquito relative to ambient temperature; if ambient temperature increases, development will resume.
L3s (1,000 µm x 40 µm) are deposited on the skin of the dog during subsequent feeding and migrate through the bite wound into the host. Most L3s molt to fourth-stage larvae (L4s) in subcutaneous tissues within 1-3 days after infection.
L4s migrate through tissues for several weeks.
A final molt to the sexually immature adult stage occurs approximately 2 months (50 to 70 days) after infection.
The young adults (2-3 cm in length) enter the vascular system and are carried to the heart and pulmonary arteries, arriving as early as 70 days after infection. Final maturation and mating occurs in the pulmonary vessels. By 4 months after infection, the worms in the pulmonary arteries are around 10-15 cm in length.  Fully mature adults at 6.5 months after infection reach lengths of 15-18 cm for males and 25-30 cm for females.
Canine hosts typically demonstrate microfilaremia 6 to 7 months after infection.
Heartworms live approximately 5 to 7 years in the dog
The heartworm life cycle is demonstrated in the diagram below:

Scholl Animal Hospital still recommends heartworm preventative for 6 months from June 1st to Nov 1st.
This report describes the typical weather at the London International Airport (London, Ontario, Canada) weather station over the course of an average year. It is based on the historical records from 1982 to 2012. Earlier records are either unavailable or unreliable.
London, Ontario has a humid continental climate with warm summers and no dry season. The area within 40 km of this station is covered by grasslands (87%) and croplands (11%).
Over the course of a year, the temperature typically varies from -9°C to 26°C and is rarely below -18°C or above 30°C.
The daily average low (blue) and high (red) temperature with percentile bands (inner band from 25th to 75th percentile, outer band from 10th to 90th percentile).
The warm season lasts from May 27 to September 19 with an average daily high temperature above 21°C. The hottest day of the year is July 23, with an average high of 26°C and low of 16°C.
The cold season lasts from December 2 to March 13 with an average daily high temperature below 3°C. The coldest day of the year is January 23, with an average low of -9°C and high of -2°C.
Daily High and Low Temperatures: 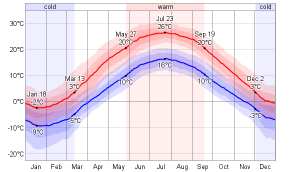